SolarKing found this article very interesting, providing an overview of what our Australian neighbours are seeing when it comes to commercial solar power.

With so much roof space available on commercial buildings, and the increasing costs of commercial power, going solar makes sense and offers a very strong return on investment.

Over the past five years, Australia has experienced a boom in rooftop solar PV that has elevated the country to world leader in the installation of rooftop solar on households.

So far, more than 1.4 million households have installed around 4GW of solar. Small commercial businesses, have also been busy, installing around 300MW, including 150MW in 2014.

The missing link has been in the bigger business rooftop arrays, those systems of more than 100kW such as those installed by the likes of IKEA, BUPA, and on huge rooftops such as the Adelaide Showground, the Brisbane markets and the University of Queensland.

One of the reasons for this has been the uncertainty over the renewable energy target. Systems above 100kW operate under a different system. Instead of getting a government rebate up-front, they have access to renewable energy certificates, which are only created when the electricity has been created.

That meant that in 2014, only 18MW of large, behind the metre rooftop solar was constructed. But that is about to change. Analysts such as Warwick Johnson, of Sunwiz, predict a near 40-fold rise in the market over the next five years, with capacity likely to reach 700MW, the equivalent of a small coal fired power station. It could be double that number.

Part of the reason for this big boost in installation from the business community is the certainty provided by an agreement on a revised RET.

But the more important equation is the realisation from big business that there are huge savings to be made – despite their often preferential tariffs – because of continued falls in the cost of rooftop solar PV.

“We forecast this market will see huge growth in coming years, growth is that accelerated by meeting the RET, but without being reliant upon it for deployment or funding,” Johnston says. 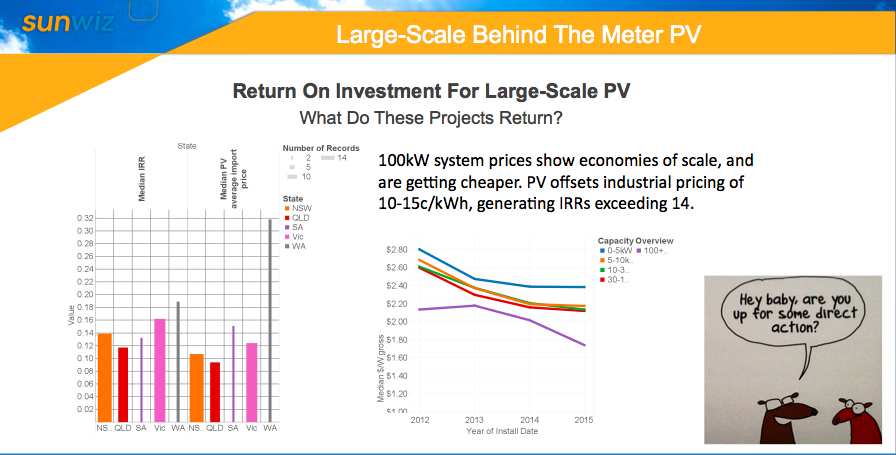 The difference between rooftop solar and large scale ground mounted projects is that the rooftop installations operate behind the meter, meaning they compete with retail prices rather than wholesale prices.

And as this graph above shows, even show many businesses are paying between 10c/kWh and 14c/kWh – compared to around 30c/kWh for many residential homes – the economics of rooftop solar still make sense. Even offsetting industrial pricing of 10-15c/kWh, large rooftop arrays are still generating returns of 14 per cent.

Indeed, as this next graph shows, an IRR of 14 per cent is obtainable without the renewable energy certificates, based on a solar PV cost of $1.75/watt, with a 250kW array producing 10MWh a day.

But with the renewable energy certificates, known as LGCs, the array can boast an IRR of 18 per cent, or a payback within 5.7 years. 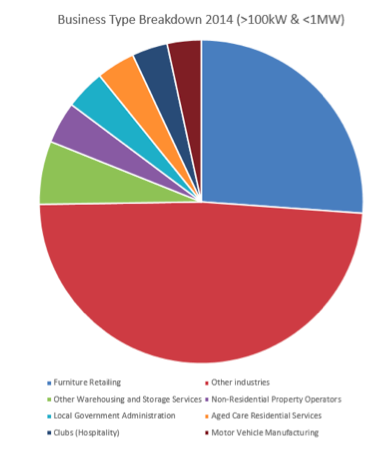 “If PV can achieve these low-risk financial returns, and isn’t reliant upon LGCs to do so, then more and more will be deployed, whatever the LGC price,” Johnston says.

That means that a lot more large scale rooftop solar will be built behind the meter, crowding out a significant amount of utility scale wind farms and utility scale solar farms that might have been built otherwise.

So, who are the companies who are installing such arrays. According to the Sunwiz analysis, it is a mixture of furniture retailers (IKEA), aged care centres (such as BUPA), local governments, warehouses, clubs and non-residential property owners.